The Daily Squib – Delivering Satirical Stories Through Spoofs and Commentaries

Magazines come in many forms, and typically feature articles and graphics designed to appeal to their readers and stakeholders. Many are focused on providing news, current events and political and social commentary. And there are also magazines that are produced with the intention of providing a humorous look at our world, while offering constructive criticism in the form of satirical content. One popular example of a magazine that thrives on humour and satirical content is The Daily Squib, a satirical magazine founded and edited by Aur Esenbel.

From Spoofs to Social Commentaries 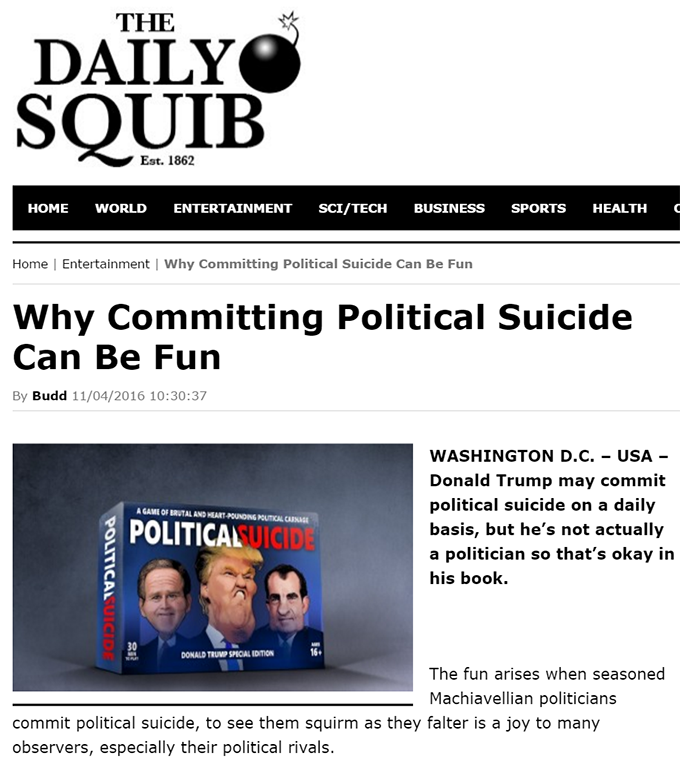 One of the best and sometimes controversial things about The Daily Squib is its use of spoof articles. More than once the magazine has managed to get attention and deliver social commentary through the art of spoofing. For example, during the 2008 US presidential elections, the magazine posted an article that reported the decision of the Ku Klux Klan or KKK to endorse then-Democratic Party candidate Barack Obama. Due to the quality of the article’s content and the nature of the elections at that time, many readers of the magazine thought that the article was factual. Readers shared the article, and soon it became an Internet rumour that has been covered on many blogs and websites. It was also reported that during this time the KKK was even asked about the authenticity of the article from The Daily Squib.

The magazine also posted a satirical article and interview involving then-Secretary of State Henry Kissinger of the United States. Again, some members of the media, particularly Al-Ahram of Egypt, carried the news article. And in 2012, Daniel Hannan also mistook the fake European Union poster shared by the magazine as the real thing.

As a satirical magazine, The Squib has managed to gain attention and produce satirical content that manages to impress, confuse and entertain its readers.