As a literary device irony is used to play with the varied meanings of words. For many writers, irony has become a tool to show the difference between reality and appearance. This literary device has become a popular tool for many writers in literature, and now is also used as a platform and inspiration for writing and publishing an informative and entertaining magazine. The Ironic Times, a weekly publication that also appears online, is one of those magazines that anchors its content and strategy in irony to deliver the message and provide entertainment to its readers. The magazine is in its 12th year, and continues to provide articles and news, with a touch of irony, humour and entertainment.

Showing the Irony in Politics and World News 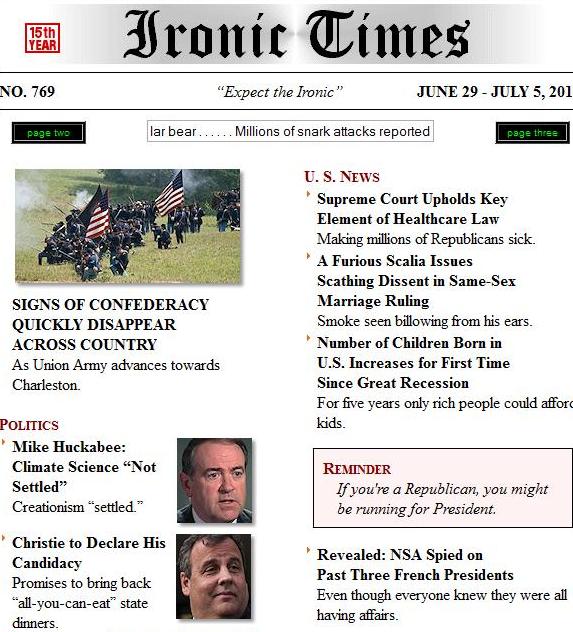 While no topic is out of bounds for the Irony Times, many of its articles and content focus on politics, world and current events, and US politics in particular. For example, with US elections, the Irony Times has often focused on the personalities behind the elections, and the politics of wheeling and dealing behind the scenes. Political figures from the United States and other countries, including Barack Obama and Donald Trump, have become favourite targets for its articles. Aside from its use within the formal treatment of news and smaller snippets, the use of irony can also be found in other sections of the Irony Times, such as the Business, Science, Entertainment and Health departments. The magazine provides biting and ironic commentaries on current events and news, all designed to deliver both information and entertainment. For example, when Apple was reported to have been slapped with a huge tax bill, the Ironic Times wrote ‘there’s no app for that’. This is just one of the many situations that demonstrate the humour and irony embedded within its articles and news coverage.